The Advocate Family: The Environmentalist

The love that Environmentalists have for nature affects all their thoughts. They are our inspired stewards of Mother Earth and Advocates for the lightest possible footprints. At the very beginning of the 20th century, and long before it was a popular idea, John Muir advocated preserving vast tracts of land. But he didn’t just write about preservation, he spoke about it passionately, every chance he got.

That’s how a three-night camping trip with President Theodore Roosevelt resulted in the return of Yosemite Valley to federal protection. Muir was the original environmentalist, and one of many to follow who learned to argue articulately for the protection of natural resources from civilization.

“Man is a part of nature and his war against nature is inevitably a war against himself,” writes Rachel Carson, author of Silent Spring, which alerted the post-war world to the dangers of pesticides. Like many Environmentalists, she could write as eloquently about nature as she could disparage its destruction. But that is the power of this Advocate archetype, including Edward Abbey, John Bower and more recently, Graham Hill, founder of Tree Hugger; Jeffrey Hollender, founder of Seventh Generation; and Julia Butterfly Hill, who sat in an ancient California redwood for almost two years to protect it from destruction.

Strengths
Physically fit and perpetually curious, Environmentalists love having friends and family on hikes, canoe trips and other forays into nature. They are typically healthy and fearless.

Weaknesses
Although they spend a great deal of time contemplating the elegant quiet of nature, they can become quite vocal in its defense as well as cynical about ”civilization” in general.

Words
“Conservation is a state of harmony between men and land.” -Aldo Leopold 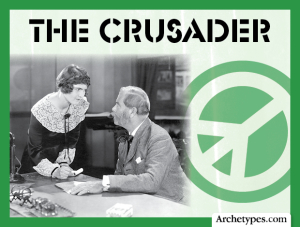 The Advocate Family: The Crusader