ArcheGuides: Classic Reads for the Intellectual

Literature can explore the depths of human experience like almost nothing else. Here are three novels for the Intellectual trying to piece the world together.

Plan on plowing through Pynchon’s mind-bender more than once — or twice — to get your money’s worth. In Europe at the end of World War II, Germany’s V-2 rockets promise annihilation; Pynchon’s characters are at the edge of the abyss, and the view is hellish. In a review of the 1973 novel, Richard Locke of The New York Times pronounced it “bonecrushingly dense, compulsively elaborate, silly, obscene, funny, tragic…bloated, beached and blasted.” In short, a world-class workout for your brain.
Buy Now: $16 at Barnes & Noble

If not for Proust’s seven-volume exploration of human consciousness, the delicate madeleine would have remained a humble pastry. But because a crumb with tea triggers an exquisite reverie in which the narrator connects a sensory trigger with a “long-dead” emotional state, the little cake now symbolizes the glorious intricacy of the brain. Savor Proust’s work, published between 1913 and 1917, and follow with Jonah Lehrer’s Proust Was a Neuroscientist, a look at artists’ epiphanies about the mind.
Buy Now: $17 at Barnes & Noble

Set in Eastern Europe and Russia as Napoleon storms across the countryside, Tolstoy’s epic (1,296 pages in the Knopf Doubleday edition) is a compelling drama awash in grief, loss, envy, loathing, and love. Bringing together the stories of nobles and peasants, generals and grunts, Tolstoy — a rich man’s son who fought in the Crimean War — creates an indelible portrait of a world in upheaval. You’ll feel clever just carrying it around.
Buy Now: $15 at Barnes & Noble 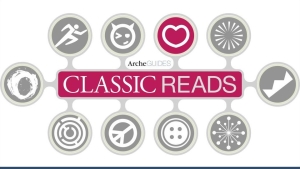 ArcheGuides: Classic Reads for the Caregiver