ArcheGuides: Classic Reads for the Rebel

Just because everybody’s doing something doesn’t mean it isn’t crazy. Rebel authors have been pushing back against the inane, insane, and compromising for years.

“The only people for me are the mad ones, the ones who are mad to live, mad to talk, mad to be saved….” These words are spoken by Sal Paradise, the protagonist of Kerouac’s 1957 novel, but they also reflect Kerouac’s own manic genius. On the Road is based on Kerouac’s wild cross-country trips with fellow Beat Neal Cassady and celebrates the giddy romanticism of their friendship. Pick it up — and when you’ve finished, go shatter some boundaries.
Buy Now: $14 at Barnes & Noble

Ever made a life-altering decision based on lust? Meet love-blind Anna Karenina, cast out by St. Petersburg society when she ditches a dead-end marriage and a young son for Vronsky, an enigmatic Russian Army officer. Vronsky is attentive in the beginning, but the couple’s relationship goes off the rails as Anna, jealous, paranoid, enters an extremely dark place. No happy ending here, but carpe-diem types will recognize themselves in the willful heroine.
Buy Now: $13 at Barnes & Noble

In Holden Caulfield’s world, “phony” is a sin. Booted from pricey prep schools, he’s an upper-middle-class misfit caught between the memory of childhood and the mysteries of becoming a man. The novel is written from inside a psychiatric hospital, where Caulfield reconstructs his story, his tone alternately scathing, nostalgic, and hilarious. His voice is unmistakable: Of a girl who gushes “grand” he says, “‘Grand.’ There’s a word I really hate. It’s phony. I could puke every time I hear it.”
Buy Now: $7 at Barnes & Noble 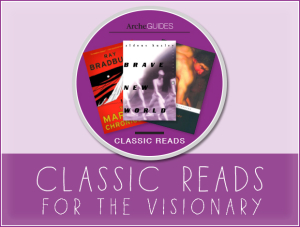 ArcheGuides: Classic Reads for the Visionary