ArcheGuides: Classic Reads for the Spiritual

Enlightenment can only come from within. But texts can point you down the right road. Let these three works help map out your Spiritual direction.

One of the most powerful works in Hindu literature, The Bhagavad Gita hinges on an encounter between Lord Krishna and his friend Prince Arjuna before a great battle. Arjuna is unsure about the morality of shedding blood — even to regain his family’s lost kingdom — but Krisha convinces him that it’s his spiritual duty. Written in Sanskrit between 1,000 and 700 BCE, it’s a handbook to spiritual awareness through meditation and service.
Buy Now: $13 at Barnes & Noble

Written and illustrated by de Saint-Exupéry, a French aristocrat and trailblazing aviator, this tender tale is one of the best-selling books in history. Set in the Sahara, where a French pilot has crash-landed his plane, it centers on the pilot’s talks with a spiritually precocious little prince who has come to Earth from an asteroid. The result: aperçus about love, friendship, duty, and ultimately, the pain of parting.
Buy Now: $9 at Barnes & Noble

A Brahmin prince who has everything but spiritual smarts, Siddhartha sets aside his lush life to wander through India. His search for meaning is elliptical, however, and he first rejects the philosophy of Buddha, then spends years under the sway of a courtesan before breaking free. Siddhartha’s failings in this 1922 masterwork, which is a vivid introduction to Buddhist thought, make his enlightenment seem that much more profound.
Buy Now: $7 at Barnes & Noble 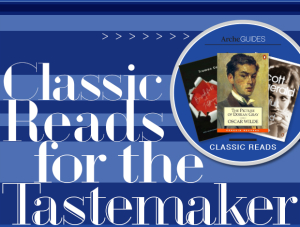 ArcheGuides: Classic Reads for the Tastemaker