ArcheGuides: Classic Reads for the Tastemaker

You have to be on the cutting edge. But it’s equally important to know what you’re doing there. Here are three novels to keep the Tastemaker ahead of the pack.

Set in Victorian London, Wilde’s comedy of manners explores the kind of raging vanity and decadence seen on Real Housewives. Deemed depraved when it appeared in 1890, The Picture of Dorian Gray traces the decline of a young Adonis terrified of losing his looks.  When Dorian offers to sacrifice his soul in order to look young forever, his physical deterioration can be seen only in a painted portrait. Wilde’s arrest for sodomy in 1891 only added to the novel’s scandal quotient: read it and think again about aging gracefully.
Buy Now: $6 at Barnes & Noble

Iconic, yes, but Audrey Hepburn’s fun-loving Holly Golightly was a bit of a screenwriter’s fancy. The heroine of Truman Capote’s gorgeously crafted novella is a fair-haired teen who is calculating and sexually experienced. To escape getting engaged to an older man, Holly bolts to South America. Yet charm remains her hallmark, and Capote’s tale will remind you that “nothing really bad can ever happen” at that fabulous store on Fifth Avenue.
Buy Now: $11 at Barnes & Noble

Fitzgerald’s story about café society in the Jazz Age reverberates with snappy lines: Gloria Gilbert, a narcissist so ravishing that “it was agony to comprehend her beauty…” weds pretentious layabout Anthony Patch for his presumed inheritance: “[She] was sure she wanted but to read and dream and be fed tomato sandwiches and lemonades by some angelic servant.” Gloria and Anthony manage to ruin their lives, but not without tossing out some gems: “Here’s to alcohol,” writes Fitzgerald, “the rose-colored glasses of life.”
Buy Now: $8 at Barnes & Noble 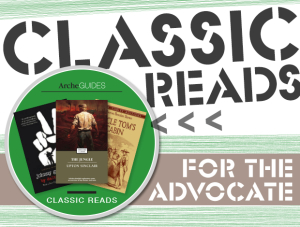 ArcheGuides: Classic Reads for the Advocate