The Creative Family: The Artist

Artists don’t just create art, they create new ways of living and looking at society. Frida Kahlo was in a traffic accident in her teens that left her incapacitated for life. But when a doctor ordered her to stay in bed on the night of her 1953 exhibition opening in Mexico City, she hired an ambulance to take her to the gallery where she was rolled out in a bed to greet her guests. This is archetypal artist behavior.

Painters and sculptors drive themselves to create new worlds in their studios and in their own lives. Van Gogh, Picasso and Pollock painted the world as they saw it in their imaginations—and they lived with a lust for life that had great intensity. Georgia O’Keefe, who lived in remote Abiqui, New Mexico, became as iconic as her paintings of nature. And if her life was somewhat hermetic, her goal was just the opposite. “When you take a flower in your hand and really look at it, it’s your world for the moment,” she said. “I want to give that world to someone else.”

Today, artists reach audiences in ever more controversial ways. Damien Hirst shocked the world with a formaldyhyde-preserved shark, Jeff Koons with a topiary puppy, and Kara Walker with violent images inspired by racisim in the Deep South. Then there’s Marina Abramović, who pushes the boundaries of human emotions with her performance pieces. In 2010 she sat at a table in the Museum of Modern Art for 700 hours, staring into the eyes of hundreds of visitors a day who sat down across from her and stayed there for as long as they wanted.

Strengths
Because they work with their hands and on their feet, visual artists tend to be physically engaging characters. They have a flair for living well, often surrounding themselves with simple and beautiful things.

Weaknesses
They can also be childish, self-involved, and detached from reality, choosing to ignore practicalities in favor of pursuing inspiration.

Words
“Everything you can imagine is real.” -Pablo Picasso 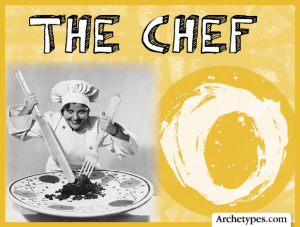 The Creative Family: The Chef