Have trouble sharing? Are you always right, even when you’re wrong? Do you want what you want when you want it? Do you get angry and petulant if you don’t get it? Must everyone else work around your needs and desires? If you think the world owes it to you, then hello Brat!

Brats know, with absolute certainty, that the world revolves around them. Their wants become needs and their wishes are more like demands. They are the Kings and Queens of their domain and everyone else exists to serve them.

In their universe, nothing else matters besides the Brat’s own base desires and those desires are to be ahead of everyone else in all things. When they don’t get their way, Brats will throw a tantrum, scream and hold their breath until they’re blue. Of course, as they get older, those tantrums become much more subtle and manipulative. Brats are experts at causing pain and misery to those around them.

If you give a Brat what they want, they will return the favor by wanting something else moments later. Brats don’t say “thank you.”

A Happy Brat
A coddled Brat is a Happy Brat. Getting what they want immediately is like heaven on earth for a Brat. When out with friends, the Brat is most pleased when the final destination is the place he or she suggested, eating the foods or drinking the drinks they’ve been craving.

Famous Brats
Veruca Salt (winner of a Golden Ticket to Willy Wonka’s factory); Donald Trump (the billionaire real estate mogul is known for demanding things his way, most Rock Stars (when you hear about a hotel room being trashed or an alcohol bill for tens of thousands of dollars, that’s a Brat at work).

Brat in Love
With themselves, first and foremost. Their love can be fickle and entirely dependent on material and emotional fulfillment. A Brat will trade up, easily, quickly and without remorse if it gets them what they want.

Brat Challenge
Understanding, and caring, that the world consists of other people who have feelings and desires is where the Brat usually fails. Showing empathy when it can net them no gain is the biggest challenge a Brat will face. Doing something to benefit someone else would be hard work, but if a Brat could accomplish it, they might realize they still get a benefit, albeit an intangible one.

How to Play It
Once the Brat realizes he or she can catch more flies with honey than vinegar, it might go a long way to making them more well-rounded people. Brats usually grow up with lax parenting, people whose desire to not see their children unhappy leads the children to believe they have no flaws and there are no obstacles which cannot be overcome by pouting, crying, or yelling.

If you are in a relationship with a Brat, be aware they will always put themselves first. If it’s a choice, you will lose every time.

If you see these traits in yourself, understand that being a Brat comes with a high personal cost. You may have friends, but only for a short time. Having everything your own way gets tiring for those around you, who sometimes might want to win themselves. You’ll have a hard time finding people who will support you when times get rough…and eventually, they will get rough.

Click here to meet the rest of the Royal Teen family 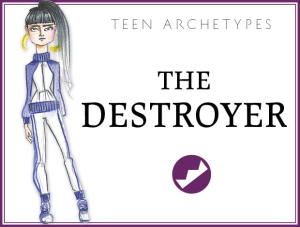