Do you envy the creative ideas of others and doubt whether you can come up with any ideas on your own? Do you believe that results are what matter, not the process? Do you like short cuts? Copyright infringements? Ever slap your name on a term paper you bought online? Ah-hem…Copycat!

Imitation is a primary way that humans learn and operate in the world. The Copycat is a rip-off artist who doesn’t imitate to learn, he or she is just too lazy or insecure to do the work it takes to come up with something original.

Pablo Picasso is often credited as saying, “Good artists borrow, great artists steal,” and some version of the sentiment has been echoed by innovators from Steve Jobs to Paul McCartney. Copycats misunderstand this phrase, taking it as a directive to use other people’s work without giving them credit. What the saying really means is that it’s not enough to imitate what another person did. To be great you have to internalize it and make it your own. That requires work, something the Copycat is too lazy or insecure to do.

That’s really too bad because the best part of being a creator is creating. In the process of the work there is a feeling of connectedness and flow, an unparalleled high, an opportunity for greater self-knowledge, revelation, spiritual evolution…For the great artist, the work is the art, and, therefore, anyone who skips this step is missing the whole point.

A Happy Copycat
The Copycat wrongly assumes that the accolades that come from showing great stolen works as his or her own will bring satisfaction, and opportunity. What it will really bring is a hollow and paranoid feeling followed by the panic of having to follow up with the next act of thievery to keep up the ruse. There is no happiness in stealing.

Famous Copycats
Cicero the Roman Senate of 1st century BC (whose speeches closely followed those of an earlier leader); Q.R. Markham (whose intricate plagiarism of crime novels puzzled the publishing world); John Myatt, (said to be the biggest art fraud of the 20th century); the Atari game Pong (accused by Magnavox as being a copy of Odyssey’s tennis game)

Copycat in Love
It’s true that people usually like people who are like them. But the Copycat tends to irritate partners by becoming too much alike. The Copycat will start adopting the language, habits, and look of their new love, totally wiping out all intrigue and mystery that the Copycat might have had going before the conversion. No one wants to have a relationship with a flat and artificial mirror image.

Copycat Challenge
Really what the Copycat needs is confidence. There is someone inside who is completely unique and powerful for all of the differences he or she embodies. The Copycat has trouble believing and trusting this, or is just too lazy to try and figure it out. Self-acceptance is the key to overcoming the self-limiting tendencies that hold the Copycat back.

How to Play It
Don’t just imitate, that’s lame. Build on the work that came before yours. Then, if you really want to be great, take it to new heights and extend in fresh directions. Be your own person, do your own work, make your own mistakes, claim your own victories. Grow!

Click here to meet the rest of the Creative Family 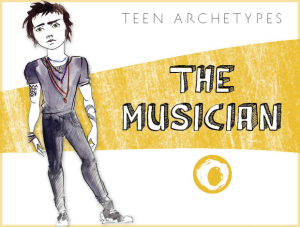