Do you talk to yourself? How about people who aren’t in the room because they are the president or a fictional character or dead: Do you talk to them, too? Do the lines between public behavior and private behavior seem blurred or non-existent to you? Do you suspect that when others look around, they’re not seeing the same world as you?

Battiness can be cute, particularly in grandparents and cats. But it can also be tiresome and difficult to manage. The Crazy 8 takes battiness to new levels. This type is unpredictable, to say the least. They are concerned about things that others aren’t: the sound electricity makes as it drips down the walls, the gremlins who mess with mail, invisible forces that live inside the icemaker…

Crazy 8s can be moody and you never can tell what will set them off. They are the ones that inspire apprehension because no one quite knows how to deal with them.  People generally have a difficult time communicating clearly with those who do not share their reality and it’s hard to get comfortable with people when the lines of communication are disconnected.

The Crazy 8 can live in any of the Archetype families, but is cozy as can be in the Visionary realm, as they see a world that others do not.

A Happy Crazy 8
Who knows what makes the Crazy 8 happy or unhappy? Only the Crazy 8 knows for sure and the rest of the world is often surprised by precisely what it is. It could be yards of Scotch tape or a pea-sized pebble collection. It could be Martian pop music or a mashed potato mountain. Many times it involves an unusually large number of pets.

Famous Crazy 8
Pythagoras (the Greek mathematician who based a religion on his belief that beans are evil). Howard Hughes, the Octomom, Phoebe on Friends, and Kat on Victorious

Crazy 8 Entourage
Crazy 8s tend to be self-sustaining loners with a high threshold for solitude. They tend to keep themselves entertained without too much help, although they certainly appreciate the care of Angels and others in the Caregiver family.

Crazy 8 in Love
Even though people may love and care for the Crazy 8, this type is likely too outside of reality to return attention in a way that is meaningful to the other person. Although, they could just as likely surprise their love with the most amazingly tender and creative gesture ever. That’s the thing about the Crazy 8. You never can tell what this type will do.

Crazy 8 Challenge
It would be remiss not to mention that the Crazy 8 may actually be insane and in need of medication and/or special care. If the Crazy 8 is not “clinical,” then the biggest challenge the Crazy 8 faces is knowing whether he or she has crossed that line.

How to Play It
The world needs diverse points of view and the Crazy 8 definitely provides one. This person just has to be careful not to also provide a burden to society because he or she either can’t or won’t act responsibly. 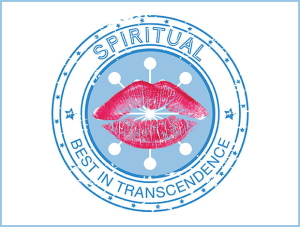 The Archetypes Guide on Kissing Styles