Drink milk straight from the carton? Instead of running around at some lame job, do you believe firmly in preserving your energy to play video games? Do you ever get so lazy that you wish it were possible for someone else to go to the bathroom for you?

Slackers are the ones on a six-year plan to earn an Associate’s Degree. They have no idea how to work a washing machine or dishwasher. While Hippies drop out of society to prove a point about its evils, Slackers drop out because…oh wait, what was the reason? Never mind. I’m too tired to think about it right now. In other words, if there’s exertion of any kind involved in a task, Slackers can’t be bothered. Can’t. Be. Bothered.

Lazy, oblivious to others, and disinclined to act or contribute in any way that doesn’t bring immediate personal gain or pleasure, Slackers are usually accompanied by some kind of enabler. They want things done for them. They sometimes have connections in the Royal family.

A Happy Slacker
Slackers believe that if they have just enough money to scrape by, they’re doing great. It doesn’t occur to them to save or be charitable. They don’t pay attention to the efforts that others make to earn money or create value in the world.

Famous Slackers
Hugh Hefner, who is nearly always seen in his pajamas; Jeff Bridges as “The Dude” in The Big Lebowski

Slacker Entourage
Slackers need people to take care of them, which is why the Slacker’s true best friend is usually the parent who puts a roof over the Slacker’s head, often way into adulthood years. Slackers also tend to hang out with the Stoner, Artist, Geek, Co-Dependent, and others.

Slacker in Love
Slackers generally can’t maintain relationships over the long term with anyone except those with the very lowest levels of self-esteem. It’s amazing that Slackers find love at all given the amount of effort they are willing to put into relationships, which is to say none, zero, nada. The minute things get hard or they have to consider another person’s feelings things will fall apart.

Slacker Challenge
The hardest part about being a Slacker is finding someone to hand you the television remote control.

How to Play It
If you feel like you have Slacker tendencies, realize that while it may feel nice to relax and do as you please, your relaxation comes at a very high cost: your self-worth. If you don’t try in life, you’ll never know what you can do. If you slack off, you won’t know real love or true happiness because those things require investment and effort. You won’t respect yourself because deep down you’ll know you haven’t done anything to earn respect. So don’t be a Slacker. Force yourself to make an effort and do the right thing, especially when that thing is inconvenient or hard.

If know someone who’s a Slacker, stop doing things for him or her. It’s not helping, and in fact, it’s making things worse. 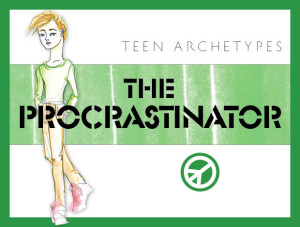