The Explorer Family: The Adventurer

Adventurers are thrill-seekers. Whether they walk the North Pole, row across oceans, fly over continents for the first time, cross Australia on a skateboard, or descend the Mississippi by paddleboard, they thrive on pushing limits in order to stimulate their senses at all levels. This results in adrenaline and endorphin highs and sometimes, injury and death.

Ferdinand Magellan was killed by natives of the Philippines. David Livingstone, after being mauled by a lion, died from malaria in Africa. Amelia Earhart, after setting records and receiving the U.S. Distinguished Flying Cross, disappeared over the Central Pacific.

Countless other mountain-climbers, sailors, and aviators have lost their lives in the name of adventure. But they are more often celebrated for the risks they take than derided, because in some way they uplift the rest of us—making heroic journeys knowing they may not return.

In more recent times, we’ve seen Adventurers with agendas, often of the environmental variety. They make expeditions to remote places that draw attention to such issues as climate change, endangered human cultures and animal species. One of these is David Mayer de Rothschild. This young scion of the European banking family is an adventuring ecologist with a charity called Sculpt the Future. He once sailed from San Francisco to Sydney on a catamaran he made of recycled bottles to draw attention to the garbage patches in the Pacific Ocean.

Strengths
Adventurers are enthusiasts. They are up for anything and can handle change with aplomb.

Weaknesses
Easily bored and ashamed when they get too comfortable, their hunger for danger can be especially unsettling for their loved ones.

Words
“Adventure is not outside man; it is within.” -George Eliot 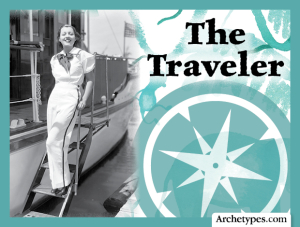 The Explorer Family: The Traveler