The Performer Family: The Actor

Actors are performers who understand what it is to be in the moment and project it to an audience. These are the people in our lives who are brilliant at lying—whether to be polite or to be manipulative. They know how to charm and are loved for it.

The Actor’s childlike gift of being able to fully believe in what they are pretending to be enables them to throw themselves into any part. The professional process fascinates audiences around the world. Al Pacino explains the gift of being utterly convincing no matter what by saying, “I always tell the truth, even when I lie.”

Meryl Streep has a more nuanced way of expressing her stunning ability to become any role she plays. “Acting is not about being someone different,” she says. “It’s finding the similarity in what is apparently different, then finding myself in there.”

Actors have various ways of getting into their roles, from Stanislavsky and method acting, to studying the books and videos of the people they are to play. Sometimes they will go to extremes to fit the physicality of the role. Adrian Brody, Hillary Swank, and Charlize Theron are a few actors who have transformed themselves for a role, to great acclaim.

One famous story allegedly took place on the set of Marathon Man. To get himself to look and feel like a man who hadn’t slept for three days, Dustin Hoffman did just that. While shooting, Laurence Olivier asked him why he looked so tired. When Hoffman explained, Olivier told him, “Try acting, dear boy.”

Strengths
Actors at their best are avid students of life, with an empathetic interest in others. They are typically dignified presences as well, and alluring in their mystique.

Weaknesses
If professionals, they can be either insecure or cavalier as a way of dealing with rejection. They can also come off as self-involved if they are overly concerned with how they present themselves or are perceived by those around them.

Words
“Acting is all about inventing. If you can fake that you’ve got it made.” -George Burns 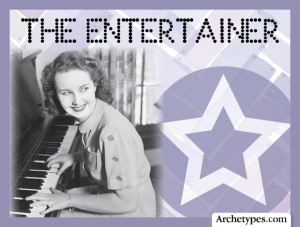 The Performer Family: The Entertainer