Do you give off a dangerous bad-boy vibe? Do you have a black leather jacket and super-dark shades? Are you a man of few words who can make his intentions known with a nod? When you do decide to talk, do the girls go all goofy, giggly, and swoony? And what about your ride? Is it sweet? Then, hello, Cool Dude.

The Cool Dude has a powerful presence, and he can say a lot without saying much. His economy of movement conveys seriousness and confidence. He’s a force to be reckoned with and he can take care of things. Capable and protective, his street smarts are always dialed to the “on” setting and he doesn’t let down his guard for anyone. The Cool Dude is nobody’s fool.

And yet, he can still have good time. In fact, he makes that a priority. He may even be a Dancer, a la John Travolta in Grease (or Saturday Night Fever or Pulp Fiction, for that matter.) He remains very much in control of his moves, both on and off the dance floor.

A Happy Cool Dude
The Cool Dude likes to be in control. He’s happiest when it’s all going right and he’s looking like the big man. His perfect scenario is flying down the freeway in his ride or seated at the VIP table where the chicks are flocking, and no one is messing with the Cool Dude’s alpha status.

Famous Cool Dudes
The Fonz, Tom Cruise in Risky Business, Ferris Bueller, the cast of The Outsiders, Beck of Victorious, Al Pacino as Slade in Scent of a Woman, George Clooney as himself, Usher, Justin Timberlake, Will Smith

Cool Dude Entourage
The Cool Dude has friends in high and low places. Some of them are the: Angel, Actor, Musician, Cheerleader, Athlete, Bodyguard, and Free Spirit. The Cool Dude cannot resist the Innocent and vice versa.

Cool Dude in Love
Girls tend to feel both fascinated and protected by this type. Even though he seems dangerous, his powerful presence lends a strange kind of security. He calls the shots. Games of attraction are one of his specialties though he manages deeper connections smoothly too. He prefers to make the rules and maintain the upper hand in relationships.

Cool Dude Challenge
No one is in control all of the time and if it seems like they are, it means they are not challenging themselves enough. The Cool Dude who breaks out of his comfort zone may not like the feeling of being vulnerable and appearing less than awesome, but unless he’s willing to risk it, he’s limiting himself. Truly confident people have a sense of humor about themselves and they’re willing to look a bit goofy at times, too.

How to Play It
If you know a Cool Dude, you probably look up to him and want to be more like him. He’s a good person to model, but just keep it in perspective and don’t idolize him. Know that this carefully cultivated image may not reflect what’s going on at a deeper level. The Cool Dude needs people around him who will help him lighten up and be silly sometimes, too.

If you are the Cool Dude, you’ve put in the time and effort and you have the life experiences that make this who you are. Just don’t take your image more seriously than you take your character. Stretch yourself. Risk being out of control sometimes. And don’t be afraid to be vulnerable or silly sometimes either. 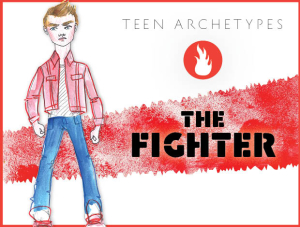