The Royal Family: The King

Kings are archetypal leaders. Whether they are wearing a real crown and sitting on a throne or wearing a baseball cap and sitting in a Lamborghini, these rulers, executives, empire builders, corporate leaders, and moguls tend to dominate everyone and everything around them.

Not all Kings have finessed their roles over the centuries. King Herod was diabolical. Louis XVI was so uncommunicative and out of touch that he alienated his court to the point that revolution became inevitable. Then there was King Richard III, whose malevolence was so notorious that Shakespeare used it as the inspiration for one of his historical plays.

But for every famously bad King, there is a famously good one. King David achieved acclaim in the Bible as a righteous man, brave warrior, and great musician. Alexander the Great, King of Macedonia, was a conqueror, visionary, and empire builder. Charlemagne was a talented diplomat who promoted education and economic reform.

Of course, when we think about who our Kings are these days, we think of the Executives who are so powerful that they become household names. Music moguls, like P. Diddy and Jay-Z, figured out how to expand their influence; they’ve learned to dominate by looking at Executive giants like Lee Iacocca, Donald Trump, Barry Diller, Harvey Weinstein, and others who rule with iron fists and unwavering confidence, sometimes to the point of breaking the spirits of employees—and the law.

Strengths
Kings don’t just create wealth for themselves. They create it for others around them, including employees and investors. At their best they are role models for discipline, superb management and the highest levels of strategic thinking.

Weaknesses
When they are crossed, they can become vindictive and even unreasonable. And some Kings feel they are above both the law and the codes of morality.

Words
“Kings are like stars – they rise and set, they have the worship of the world, but no repose.” -Percy Bysshe Shelley 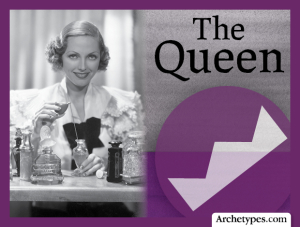 The Royal Family: The Queen