Discover the Queen Bee/King He Archetype

Do you socially rule the school? Do you think it’s your job to show everyone who’s cool and who’s not? Are superficial factors more important than character to you? Do you feel pretty powerful, even though you’re secretly afraid that at any moment someone could steal that power away from you?  Then you just may be the Queen Bee or King He.

The Queen Bee and King He are the Mean Girls and Alpha Males who lead the pack at school and whatever scene they enter. Competitive and catty, their self-worth is tied into not only who likes them but who will obey them without question. Since they are threatened by anyone who might infringe on their power, if they single you out you might consider it a compliment; it means they’re afraid you will usurp their ruling position.

The Queen Bee and King He are master manipulators who gain control by making it seem as though being their friend is a huge prize that guarantees safety and clout, while being their enemy is equivalent to social suicide. They prey on people’s fear of public humiliation and make sure to target examples to prove the point of what will happen to those who do not believe and serve their power position.

A Happy Queen Bee/King He
This type is motivated by the desire for control, not the desire to interact and connect with others. Therefore, the normal shows of affinity and affection are not enough. They want power. Nothing makes the Queen Bee or King He happier than the physical proof that this aim has been achieved. Example: the Queen or King wears a new fashion and the next day everyone in school is wearing it. Oh, joy!

Queen Bee/King He Entourage
The Royal-born require a vast array of talents around them. They have special relationships with the Diva, Gentlemen, Metrosexual, Athlete, Bodyguard, Artist, Musician, Activist, and Intellectual. They are flattered by the Copycat.

Queen Bee/King He in Love
The partners of these Royal pains often feel like servants, as they are expected to tend to the every whim and need of their Royal grace. They expect their sweethearts to do their dirty work and carry out all orders small and tall. In return they offer their loves the privilege of being seen with them.

Queen Bee/King He Challenge
Oddly enough, those of this type don’t usually realize how vindictive and nuts-o they are being because there is usually some other reason they are behaving in this manner. Those who seek control to this extent are usually reacting to a perceived loss of control in another part of their lives. An unhappy home life, family crisis, or other unhealthy family dynamic may play into the Queen Bee or King He’s insatiable power-lust.

How to Play It
If you are a victim of this personality type, do not suffer in silence. Bring an authority figure into the scenario. Don’t be fearful; this type is like a predator who thrives on fear but is also secretly even more afraid than her prey. Be strong, say what is, say what’s right.

If you see the Queen Bee or King He tendency in yourself, then, simply put, knock it off. You’re going to be so embarrassed and ashamed later when you realize how lame and babyish your displays of indirect aggression really are.

Click here to meet the rest of the Royal Teen family 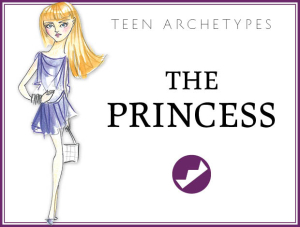