The Spiritual Family: The Mystic

Mystics renounce all worldly desires for religious ecstasy. They are the most ethereal of Spiritual archetypes and are willing to rid themselves of ego and renounce all comforts and daily concerns in exchange for a life of higher consciousness.

Through study (Jewish mystics of the Kabbalah), dance (whirling Dervishes of Sufism), praying, meditation (Buddhism) or the chanting of mantras (Hinduism), they become seekers and ascetics willing to endure great physical suffering to transcend the earthly for more spiritual realms of existence.

There have been Mystics in every religion, of course, including Sri Ramakrishna, Chuang Tzu, Emanuel Swedenborg; and Meister Eckhart, a 13th-century German theologian who wrote on metaphysics and spiritual psychology, and whose work is often referenced as a bridge between eastern and western religions.

In the 20th century, G. I. Gurdjieff was a philosopher and Mystic who visited America frequently from Turkey in the 1920s to encourage transcending daily life to come into a state of constant awareness. “Religion is doing,” he wrote. “A man does not merely think his religion or feel it, he lives the religion as much as he is able.” Mystics are full-time seekers. They challenge themselves and others as well to feel spiritual and transcendent at every moment.

Strengths
Mystics can be inspiring and capable of invoking ecstasy with even more potency than poets or musicians. They have a way of encouraging higher spheres of interaction in all circumstances.

Weaknesses
They can, of course, be ungrounded and haughty when faced with people they feel are less evolved. There is also a tendency, as they pursue their higher levels of ecstasy, to be hermetic.

Passions
Chanting, prayer, natural hallucinogens such as peyote, ayahuasca and psilocybin mushrooms, along with self-denial and asceticism including fasting and self-flagellation.

Words
“The business and method of mysticism is love” -Evelyn Underhill 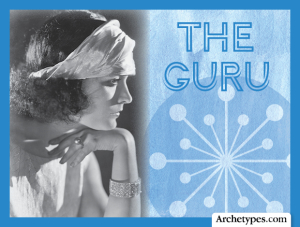 The Spiritual Family: The Guru