Stress Management Tips for the Advocate

Archetypes Authors2016-08-14T12:30:02-04:00
Saving the world is hard work, and pressure comes with the territory. Here are a few ideas for lightening the load even as you press on with your mission.

Do One Small Thing
Yes, the rainforest is shrinking, there’s arsenic in our water, and women still earn less than men, but you’re not going to fix those injustices today. For an instant pick-me-up, make a difference in less than 10 seconds: Compost your lunch scraps, water a plant in your office, or just hold the door for a stranger. As fellow Advocate Oprah Winfrey says, “There is no greater gift you can give or receive than to honor your calling. It’s why you were born. And how you become most truly alive.”

Cuddle with a Canine
Or a cat, or a ferret, if that’s your thing. Findings from the University of California, Santa Barbara, show that having a furry friend with you during a stressful event is more soothing than being with your spouse or BFF. The researchers believe it’s because you don’t feel that Fido is evaluating your performance, just accepting and supporting you unconditionally. No pets? Volunteer to walk a dog at a local shelter during your lunch break. You’ll chill out and make a difference. Win-win!

Forgive
When you see people littering or leaving a store laden with plastic bags, your blood pressure spikes. Let it go. It doesn’t mean you’re condoning or excusing the offense. You’re just recognizing that you can’t control other people’s behavior and refusing to let it make you bitter. Studies link forgiveness to lower blood pressure, stronger immunity, and reduced stress hormones.

Peace Out
A steady stream of bad news spikes stress levels and can even increase physical pain. A study in Israel showed that chronic pain patients who watched more TV coverage of a terrorist attack were more stressed and felt more intense pain than patients who switched off the tube. Try doing an occasional “news blackout,” where you turn off CNN, close out of NYTimes.com and leave mail from PETA unopened. It won’t bring peace to the world, but it will bring peace of mind, at least for one day. 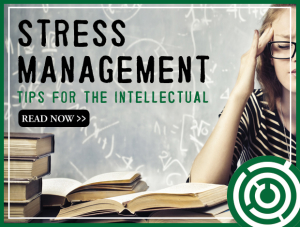 Stress Management Tips for the Intellectual