Do you secretly love thinking that at any moment life as we know it could end forever? Do you see a future that involves war, chaos, anarchy, natural disaster and possibly zombies? Do you have a year’s worth of survival supplies on-the-ready and do you imagine who you’ll share them with when doomsday comes – and who you won’t? Then you might be a Catastrophic.

Catastrophics are the people who use their psychic powers (real or imagined) to predict a dreadful future, the likes of which would scare children and excite television network executives.

Sometimes Catastrophics seem like everyday people but when you scratch beneath the surface of polite conversation you’ll find out about their obsession with the end of days.

Then again, some Catastrophics can’t stop talking about Armageddon; it’s like an obsession or a religion. Speaking of religions, there are entire religions based on instilling fear in others and the leaders of those organizations are grade-A Catastrophics.

A Happy Catastrophic
Horrible news stories that highlight the worst evils of humanity will energize the Catastrophic who sees these events as signs that their time to fight and/or rule is coming.

Famous Catastrophics
John of Patmos (who wrote the book of Revelations in the New Testament of the Bible), the Heaven’s Gate cult, 2012 theorists, Chicken Little

Catastrophic Entourage
The Catastrophic will communicate frightening tales to anyone who will listen and is especially impactful on impressionable types such as the Innocent, Hippie, and Dreamer.

Catastrophic in Love
The partner of the Catastrophic had better be on board with the whole vision or their differences will cause a major rift in the relationship. At some point the partner might be asked to help “prep” for the end, learn survival skills and review and practice the plan for when the whole disaster goes down, tick, tick, tick…

Catastrophic Challenge
You know how seniors in high school get “Senioritis” and don’t see the point in participating in school for the last part of the second semester? They think: What’s the point? I know what my grades are going to be, I’ve got my post-school plans laid out, and now I’m just showing up to mark time before everything starts to happen for me for real.

That same kind of thing can happen for the Catastrophic who might think: What’s the point of living a good life now when it’s all going to blow up tomorrow?

How to Play It
News flash: We’re all going to die. So why not do something beautiful with your life while you can? Bonus points if that “something” doesn’t put the rest of us in a paranoid mood. 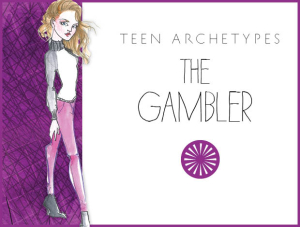