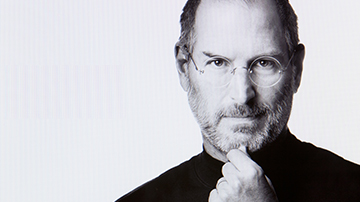 Creativity is just connecting things. When you ask creative people how they did something, they feel a little guilty because they didn’t really do it, they just saw something. It seemed obvious to them after a while.

Remembering that you are going to die is the best way I know to avoid the trap of thinking you have something to lose. You are already naked. There is no reason not to follow your heart.

You can’t connect the dots looking forward; you can only connect them looking backwards. So you have to trust that the dots will somehow connect in your future. You have to trust in something — your gut, destiny, life, karma, whatever. This approach has never let me down, and it has made all the difference in my life.

Your work is going to fill a large part of your life, and the only way to be truly satisfied is to do what you believe is great work. And the only way to do great work is to love what you do. If you haven’t found it yet, keep looking. Don’t settle. As with all matters of the heart, you’ll know when you find it. And, like any great relationship, it just gets better and better as the years roll on. So keep looking until you find it. Don’t settle.

Being the richest man in the cemetery doesn’t matter to me … Going to bed at night saying we’ve done something wonderful … that’s what matters to me.

Steve Jobs
Steven Paul Jobs (February 24, 1955 – October 5, 2011) was an American entrepreneur, marketer, and inventor, who was the co-founder, chairman, and CEO of Apple Inc. Through Apple, he is widely recognized as a charismatic and design-driven pioneer of the personal computer revolution and for his influential career in the computer and consumer electronics fields, transforming “one industry after another, from computers and smartphones to music and movies.” Jobs cofounded and served as chief executive of Pixar Animation Studios; he became a member of the board of directors of The Walt Disney Company in 2006, when Disney acquired Pixar. Jobs was among the first to see the commercial potential of Xerox PARC‘smouse-driven graphical user interface, which led to the creation of the Apple Lisa and, a year later, the Macintosh. He played a role in introducing the LaserWriter, one of the first widely available laser printers, to the market.

Steve Jobs is a Visionary.

Steve Jobs is an Intellectual.

Steve Jobs is a Creative.